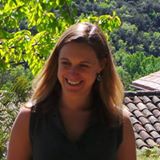 Priscilla Morris is a fiction writer from London, who lives between Ireland and Catalonia. She has an MA with Distinction and a PhD in Creative Writing from the University of East Anglia and has taught creative writing at UEA, Kingston University and City Lit. She currently lectures in Creative Writing at University College Dublin. In her twenties and early thirties, she taught English as a foreign language in England, Spain and Brazil. She read Italian, Spanish and Social Anthropology at Cambridge University. She is passionate about teaching creative writing.

“Priscilla Morris’ debut novel set during the siege of Sarajevo is captivating, heartrending – an irresistible and beautifully crafted portrait of a woman and her city falling apart. As one is swept up in Priscilla’s storytelling, one also inevitably calls to mind the still-shocking fact that this siege, the longest in modern warfare, and the larger Balkans conflict of which it was part, happened on our doorstep and in our lifetime.” Rowan Cope, Duckworth Books, the Bookseller.

Black Butterflies will be published in May 2022 to mark the thirtieth anniversary of the siege.

Priscilla is represented by Sophie Lambert at C&W.